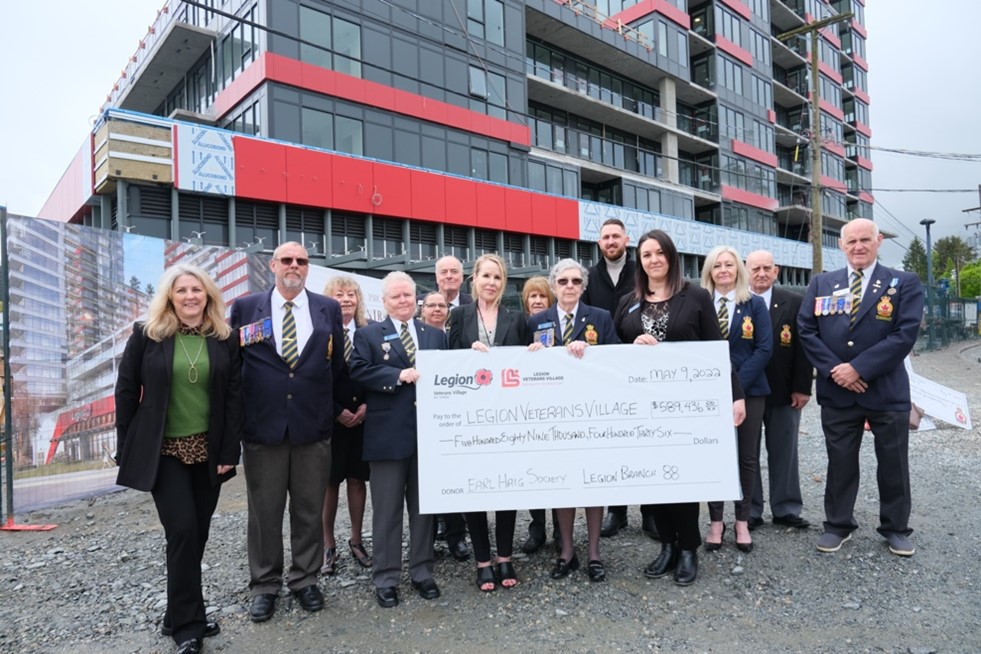 Photo: Representatives from the Maple Ridge Legion Branch 88 and the Earl Haig Society presenting a total of $600,000 for the Legion Veterans Village Centre for Clinical Excellence, which is slated to be finished construction in late 2022.

Surrey, BC (May 19, 2022) – The Royal Canadian Legion Maple Ridge Branch 88 together with the Earl Haig Society has gifted the Legion Veterans Village Research Foundation (LVVRF) a total of $600,000 to initiate the ongoing mental health, PTSD, technologies and rehabilitation research within the Legion Veterans Village Centre for Clinical Excellence.

The funds ($589K plus additional $10K) will be used to create the LVV Centre of Clinical Excellence within the national clinical research networks. This builds on key federal and provincial partnerships as the newly formed non-profit charitable arm of Legion Veterans Village (LVV) launches a fundraising campaign for the LVVRF. In recognition of their contribution, the Foundation will name the main boardroom at the Legion Veterans Village Centre of Clinical Excellence in honour of the Earl Haig Society.

“We are so grateful to the Legion Maple Ridge branch and the Earl Haig Society for their long-standing work to support veterans and for this generous contribution to the Legion Veterans Village,” says Rowena Rizzotti, Project Lead for Legion Veterans Village. “It’s because of donations like these that enable us to invest in innovative technologies like the Lokomat, and to advance clinical research studies in the areas of rehabilitation and brain health including post-traumatic stress disorder (PTSD), mental wellness and other neurological conditions that are significantly impacting veterans, first responders and their families.”

The Foundation recently established the Centre of Clinical Excellence Leadership Team, comprised of science and clinical experts to lead the mental health, PTSD and rehabilitation clinical services soon to become available to veterans, first responders and their families, as well oversee the clinical research and innovation activities of LVV.

Legion Veterans Village is currently under construction in downtown Surrey, BC, and is slated to be completed in late 2022.

The Earl Haig Society was incorporated in the Province of BC in March 1960 as a charitable institution (without profit to its members) for the purpose of owning and managing low-rental housing projects for elderly citizens, families and others within the part of the County of Westminster lying north of the Fraser River. The original subscribers were representatives of various Branches of the Royal Canadian Legion. Over the years, the participating Branches withdrew their memberships leaving Maple Ridge Branch 88 as the sole member. Upon sale of the last remaining real properties of the Society in 2021, the Society was dissolved and the assets were transferred to the Maple Ridge Branch 88.

About the Maple Ridge Legion

The Maple Ridge Branch of the Royal Canadian Legion was established by Charter in 1927. It has grown to be one of the largest, most successful branches in Canada with membership in excess of 2000 and 3 buildings, with assets over $50 million dollars. With strong Executive leadership, hard-working staff and volunteers and dedicated members, Maple Ridge Branch 88 continues to remain an active and important pillar in the Ridge Meadows community. www.legion88.com FB: www.facebook.com/mapleridgelegion88

The Legion Veterans Village is a unique $312-million, two-phase, multi-purpose social infrastructure project in the City of Surrey, led by the BC/Yukon Command of the Royal Canadian Legion, together with Whalley Legion Branch 229 and Lark Group. The project includes a mix of 495 market housing condominiums, 91 affordable housing units, a Centre for Clinical Excellence for veterans and first responders focusing on PTSD and mental health, an Innovation Centre for Rehabilitation and a new facility for the Whalley Legion Branch 229.

Once completed (slated for late 2022), a key priority will be the integrated delivery of a continuum of programs and services for veterans and first responders, as well as contributing training and research towards new practices, interventions and technologies in mental health, counselling, engineering, robotics and advancements in neuroscience, etc. www.legionveteransvillage.com